February 10th, I got to the barn in the morning and found Vance down in his stall, nickering for help. I don't know how long he was down; I can only hope it wasn't for very long. When I opened the stall door, he struggled again to get up, but with his hindquarters lower than his front, and with his compromised joints, he just couldn't do it alone. I phoned John to come help and after finagling some ropes and slings we tried, to no avail. We called the vet, then proceeded to take the stall wall down so we could get him in a more open area and a better position to try and haul him up.
As we waited for the vet, Vance rested, eyes closed. I think we both knew he was done trying. His old joints just couldn't do what he wanted them to do. He was tired. When the vet arrived, we agreed--it was time.
Vance Lustre, a New Zealand bred pacer, landed at Pete's after running his last race at a fair. He lived out his days eating and bossing the herd at Pete's, including our 3 Thoroughbreds. He made it to the amazing age of 37, still showing off his trot every now and then when our gang got him going.
With Rolex down in Kentucky, it's been a quiet winter for the boys: just Harley and Vance. They weathered the blizzard, with Vance was none too happy to be cooped up for 18 hours, as the snow swirled and drifted around the barn . The next evening, under a sky illuminated with rose and gold, Vance walked towards the far end of the field, as if to say, "You're not putting me in that barn for another 18 hours!" But once he realized Harley was headed inside, he turned around and met me at the bottom of the hill for carrots.
Vance looked like a teddy bear in winter, thick black fuzz, and a curly, bushy forelock. Snow was for rolling in, especially first thing in the morning after being let out. As he aged, he usually managed to place himself strategically so he could get up without too much trouble. He could be a curmudgeon, chasing everyone away from the feed buckets, as he sampled them all, just to remind them who was the boss hoss. His ankles were size of coconuts from a life spent racing, from New Zealand to New York, and eventually, to Maine. He learned to beg for carrots from watching Harley. I'd stand between them, each butting me with their noses, asking for another carrot. He liked having his face groomed and would drop his head to lean into the brush. With each passing year, more grey and white appeared on his face.
Rest easy, Vance, and say hello to Ruffy for me. She's waiting for you.
Posted by lmel at 3:29 PM 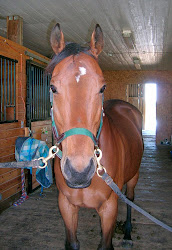